Reflections on a Visit to a Graveyard 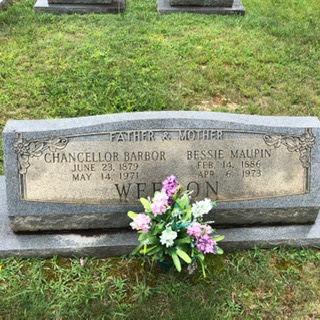 It was last June. My niece Jessica was getting married to her beloved Curtis. While we waited after the rehearsal for the meal to arrive (long story...), my brother Maupin and I visited the graveyard across the road from Richardsville United Methodist Church (I remember when it was still Richardsville Methodist Episcopal Church South!). We visited our brother's grave. Joe died 34 years ago tomorrow (it was Palm Sunday that year). We visited our parents' grave. And our grandparents'. Both maternal and paternal grandparents are in this graveyard. My father's mother's grandmother is buried behind the Church, the only grave in that location. All the rest are together in the cemetery. So many we had known and loved: Aunt Hattie, Aunt Connie, Aunt Emma, Aunt Fanny, Aunt Kitty, Aunt Ada, Uncle Archie, Uncle Leon, Uncle Jim, Aunt Gee and Uncle Cleve, plus those we never met, but learned to love through our parents' stories: Uncle Seldon, Aunt Annie. But above all Joe, mom and dad, and our grandparents. That's where we lingered.

They've constructed a memorial garden just beyond the Weedon section with a bench. Maup said: "So's you can just sit and remember." He sat for a spell (he was a bit winded that day). I stood beside him and we did remember.

I surely never guessed that the following day would be the last time I'd ever see him in this age. I said our good-byes after the wedding, we headed up to Maryland for a visit with Cindi's family and then home to Illinois. Only to hear in a couple weeks that Maupin had suffered a heart-attack and died. Reflecting on it, I wasn't surprised. He was weak at the wedding; I could see it. Much weaker than I remember him ever being.

We gathered in Richardsville UMC for the funeral and it was such a blessing to see the extended family. But it hit me then as it still does to this day: Maupin was cremated and Nancy, his wife, chose to keep the remains. That means there will be no grave to go visit when we return to Richardsville for him. I grieve for that. I don't know what it is, but there is something about returning to the graves, and remembering, and knowing that here lie the mortal remains of those from whom you came, or to whom you were connected by blood. I can't visit Richardsville without visiting the graveyard. I wish I could get there more often. My sister is so faithful in keeping flowers on the graves of our loved ones. I know some regard that as mere sentimentality. But I think it's more than that. It's a recognition that "what God joined together" death ought not separate. On many of the tombstones there are scripture verses proclaiming this in various ways: "Here we have no continuing city." "If this earthly tabernacle is destroyed..." "Precious in the sight of the Lord is the death of His saints."

I'll still remember Maupin. As long as I live I will never be able to forget this brother who was closer to me in age than any of my other siblings (I'm the caboose). But I grieve that there is no place for me to stand by his mortal remains and remember and pray. But I’m grateful I can still stand by Joe’s grave.

Addendum: Cindi asked me years ago where I wanted to be buried. I’d love to say: Richardsville, but here WATER is thicker than BLOOD. I’ll happily be buried in St. Paul’s cemetery in Hamel, which has become our home. And I’ll be near Cindi’s mom. She’s buried here too.
Posted by William Weedon at 1:09 PM 1 comment:

Homily on the Passion, Part III

Homily on Luke 22:46-62
In the name of the Father and of the + Son and of the Holy Spirit. Amen.
As we noted last week, people loved by God, we don't get very far by studying the behavior of the disciples during the events of our Lord's Passion. Judas' sad betrayal, leading the mob to Jesus and identifying him for them with a kiss; the disciples with the unsheathed sword, wacking off the ear of the high priest's servant (John lets us know that was Peter and that the servant's name was Malchus); or Peter's denial that he knew Jesus or was one of his disciples or had the first clue what they were talking about. Selling out the Lord, hurting others in our zeal to defend the Lord, and then wimping out when we could open our mouths and confess...I dare say we know something of all of these and the shame that attends them.
But what is captivating is Jesus' reaction to betrayal and violence and denial. To Judas, one last word of grace: "Judas, would you betray the Son of Man with a kiss?" How often had Jesus embraced him, welcomed and loved him? And even at the Supper had fed him with his own holy body and blood and told him it was for him and for the forgiveness of sin, his sin too. But he turned away in heart from it all and then feared it was lost forever. Yet even as he went to embrace the Lord and kiss him to hand him over to the mob, Jesus is still reaching for him.
And when Peter's sword swings and severs the ear of the high priest, Jesus intervenes: "No more of this!" He not only stops the violence that would seek to defend Him, to prevent Him drinking the cup that His Father had given Him to drink, but He even here does good to one of those who came to arrest him. He heals the servant's ear. Does His love know any bounds? He continues doing good to those who came out to do Him nothing but evil. And even his challenge to the officers and elders: "Have you come out as against a robber, with swords and clubs?" What was He doing but inviting them to consider the madness of what they were doing in their hour and in the power of darkness?
And after they have seized him and taken him into the high priest's house, Peter sneaking in and being caught, being afraid, and denying three times before the rooster crows, just as Jesus had told him it would be. But when it happens, only Luke records this, Jesus turns and looks at Peter. In our sinfulness, I fear we write on our Lord's face the wrong look. This was no: "See, I told you so." Jesus never had to play that game. He never got a high from showing others just how right he was the way we do. No, people loved by God, this was a look of love. It was a look that conveyed to Peter: "Man, you may deny that you know me, but I still love you and I do this for you, and remember that I have promised that I have prayed for you and that when you turn again, strengthen your brothers. You will turn again, Peter."
It's that look of tender love that smashes the Rock-Man to bits and and leaves him running away and crying his heart out for his own shame in the face of such enduring love.
Such is the gaze, people loved by God, that your Jesus would turn on you this day too. He knows full well, better than you ever will, the countless betrayals and denials and all the harm you have wrought on others when you sought to defend Him. He knows it. For it all, He is going to the Tree for love of His Father and, yes, for love of you. He looks upon you in your nakedness, in your shame, in the mess of your life and when you see His gaze, it is not reproach. It is not "I told you you were a bunch of sinners and that you didn't know the half of your own evil" but it is His "how how much I love you and I will never let anything in heaven or on earth separate you from my love. You are mine."
During Lent and always when we remember our shame, it is good for Jesus to gaze upon us, that we might weep our bitter tears with Peter and all penitents. Repentance that is of such a depth is wholly the gift of His love, of knowing that we have betrayed and denied the One who loved us so deeply and still does. God grant us all such tears, but above all, God grant us all to see the face of Christ gazing upon us not in anger, disgust, rejection, or hatred, but from an abyss of love so fathomless that it swallows up all sin and shame.
In the name of the Father and of the + Son and of the Holy Spirit. Amen
Posted by William Weedon at 6:18 PM No comments: 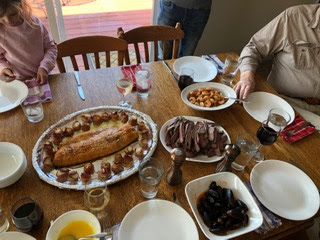 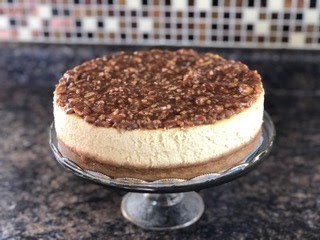 Today ten of us gathered to celebrate Rebekah Lee Ibisch's 28th birthday (which fell on March 21); she wanted surf and turf. So... We served up a huge baked filet of salmon, surrounded by bacon-wrapped bay scallops, muscles in tomato sauce, sautéed shrimp (with lots of old bay!), london broil, salad (for any who wanted the rabbit food), and her brother made her a fabulous pecan maple cheesecake. It was quite the feast!
Posted by William Weedon at 5:51 PM No comments:

The Flood Prayer in the Lutheran Baptismal Liturgy

>
> Compare the Great Flood Prayer to this passage from 3 Maccabees:
>
> 3 Maccabees 2:4ff
>
> You destroyed those in who in the past committed injustice, among whom were even giants, who trusted in their strength and boldness, whom you destroyed by bringing upon them a boundless flood....
>
> Flood Prayer: According to Your strict judgment, You condemned the unbelieving world through the flood, yet according to Your mercy You preserved believing Noah and his family, eight souls in all...
>
> 3 Maccabees 2:6ff
> You made known your mighty power by inflicting many and varied punishments on the audacious pharaoh who had enslaved your holy people Israel. And when *he* pursued them with chariots and a mass of troops, you overwhelmed him in the depths of the sea, but carried through safely those who *had put their confidence in you, the Ruler over the whole creation.
>
> Flood Prayer: You drowned hard-hearted Pharaoh and all his in the Red Sea, yet led Your people Israel through the water on dry ground.
>
>
Posted by William Weedon at 3:02 PM No comments:

Check out this:
https://cphfaithcourses.com/thank-praise-serve-and-obey/
A course on my book, hosted by yours truly!
Thanks, CPH!
Posted by William Weedon at 5:28 PM No comments: