Fundamentally the plea for the Church to recognize, further, and live congruently with a life of receptivity, where all is gift from the Triune God, as the poet put it, "unasked, unsought, unearned." Gift from the heart of Him whose love for us knows no bounds and who summons us to be enlivened by simply receiving. "Open your mouth wide and I will fill it!" Psalm 81. Blessed Festival, people loved by God!
Posted by William Weedon at 9:22 AM 1 comment:

Therefore the best thing is to enjoy the things that you have in the present, to do everything in the present, and to let what is evil flow past you.
Posted by William Weedon at 9:15 AM No comments:

Therefore let us not torment ourselves about future things, but enjoy present things.
Posted by William Weedon at 10:18 AM No comments:

To Lydia Charlotte, my YOUNGEST granddaughter. Can't believe it was a year ago I first held you. 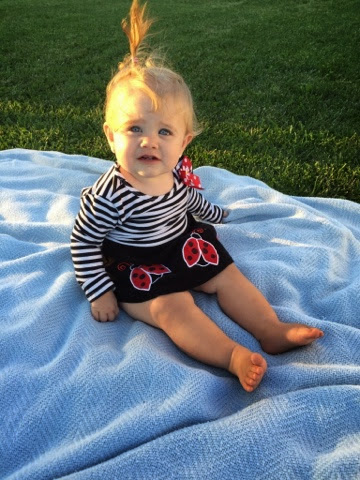 Luther on Ecclesiastes 2 - at the Heart of the Receptive Life

This does not mean that happiness is condemned as something evil or vain. What is condemned is human striving and planning, when we ourselves want to try to create happiness without respect to the will of God. But as both come from God, let us use them. As it is a sin to invite anxiety and sorrow by our own counsels and also a sin to refuse to suffer them when they are imposed upon us by God, so it is also to be condemned if we run away from happiness and do not accept it when it is given by God.—Luther on Ecclesiastes 2
Posted by William Weedon at 9:30 AM No comments: 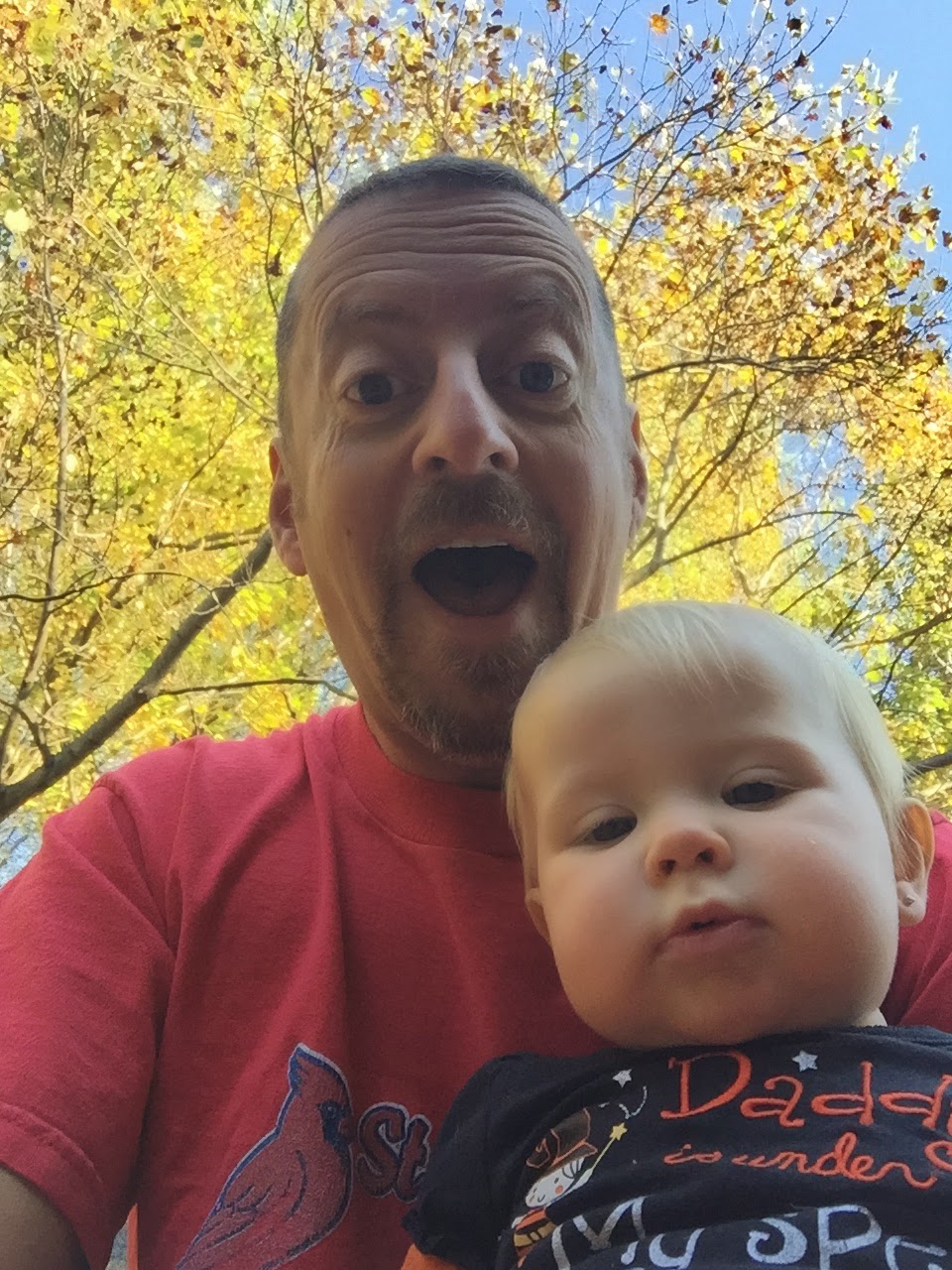 Can hardly believe it was a year ago that Lauren went into labor nearly a month early and surprised us all (and most of all the hospital staff, who were expecting her a month later for a c-section!), and gave birth to Annabelle,  stealing her cousin's due-date! Though she is littler, she thus became our eldest granddaughter.

I have loved reading Pr. David Petersen's sermons for years. He's simply one of the best preachers you can hope to hear. And NOW Emmanuel Press has issued a new volume of his homilies: God With Us: Advent, Christmas and Epiphany Sermons by David H. Petersen. Awesome! One for every single holy day in these great seasons.
"Adam and Eve had wanted in their greed to become like God. So God became like them, was incarnate, was made man..."
"It's not just that you receive love. He has also redeemed you as a lover..."
"We all go the way that He has gone; the way also of St. Mary. These sorrows reveal our hearts. They reveal who we really are. They uncover us..."
"Faith causes you to feel sorrow and shame, not doubt or unbelief."
So many, many more. I fully intend to mark the holy days this year with a bit of Petersen each day. You can too. Visit Emmanuel Press and place your order. You'll be blessed!
Posted by William Weedon at 11:31 AM 1 comment:

has definitely hit a home run with how all these things are working so beautifully together. I absolutely love my iPad mini and it is usually what I take on the road to present from or preach from. It's got incredibly great battery life and is a faithful workhorse. I have a keyboard and case I bought for it, and after a bit of getting used to the slightly odd layout, I can fly on it as fast as on my laptop (which usually stays at work and gets left behind...)
And the iPhone 6! It's amazing on so many levels. I love the new instant hotspot; the way the camera basically doesn't even know how to take a bad shot (big for me, because my hands shake a bit); and the night reading mode for iBooks...and....and a hundred other things. The thing is amazing, but I'm not sure why we call it a phone at all. That's the LEAST of its functions, but it does it that one handily as well.
The other day, David asked me if I even imagined at his age that I'd be able to hold the collective wisdom of the human race in my hands and that such a slim thing could be all the devices it is (phone, video capture and play back, library, photo album, camera, game center, newspaper etc.). I readily confessed that I could not have imagined such a thing. David then asked: "But where will it be when I'M your age?" Mind blowing even to think of. One thing I'd be willing to bet on: Apple will be there, making it all not just work, but work insanely well and with beautiful simplicity.
Posted by William Weedon at 2:05 PM 3 comments:

As by dying, He rescued from death those who were dying, so by taking upon Himself the curse, He delivered them from it.
Posted by William Weedon at 9:05 AM No comments:

For as regards the former Dispensation and Law, I had incurred the severest punishment, and had long ago perished, for all have sinned, and come short of the glory of God. And we, who lay under sentence, have been liberated by Christ, for all of us are dead, if not in fact, at least by sentence; and He has delivered us from the expected blow. When the Law had accused and God had condemned us, Christ came, and by giving Himself up to death, rescued us all from death. So that the life I now live in the flesh, I live by faith. Had not this been, nothing could have averted a destruction as general as that which took place at the flood, but His advent arrested the wrath of God and caused us to live by faith.—St. John Chrysostom, Galatians 2

Posted by William Weedon at 10:38 AM No comments:

He was always so...polite, kind, intelligent. He had the gift of putting others at ease. I always wondered if the Lord who snatch him up for the office of the holy ministry. His eyes were quintessentially honest. They were an open door to a beautiful soul. He couldn't deceive if he tried. And now he's gone. Crossing a street and struck, a college freshman. And a family left in ruins behind him. And all the inevitable questioning: "why, Lord?" and the stony silence of heaven the only answer. Well, not the only answer. Connor knew that the final answer, and the only one that held, was from a Cross. It doesn't answer our "why?" but it does assure of the only thing we can know with certainty: behind all the mess and the disaster and the tears, stands a Love that is unshakeable, secure, and our only peace. Connor goes to his grave redeemed, loved, and REMEMBERED. The Savior who has named him His will raise him on the last day and we will be there, rejoicing with him again. In the meantime, rest in peace, young friend.
Posted by William Weedon at 4:50 PM 2 comments:

again after a wonderful time in Texas at Built on the Rock: Christ, Culture and Sacred Music. Pr. Todd Wilken, Dr. Charles Ore and yours truly got to present and it was a lot of fun. I am very, very thankful, howevever, to be home again. Dorothy had it right. There's no place like it. I am sitting here on this cloudy, chilly day in my recliner with faithful Lucy dozing beside me, a glass of wine at my side and a good book on my iPad. Ah, if only it gets a little more chilly I may well throw a match on the fire (it's ready to go!)...just hope I remember to open the damper.
Posted by William Weedon at 3:32 PM 2 comments:

in the Treasury's Daily Prayers, we pray for the dying. Thinking of the growing Ebola crisis, the prayers become ever more apt and fitting:
To comfort all the dying,
To forgive them all their sins,
To lead them out of this misery into eternal life:
We implore You to hear us, good Lord.
And for ourselves:
Holy Lord God,
holy and mighty God,
holy and most merciful Redeemer,
allow us not to lose hope
in the face of death and hell:
Lord, have mercy.
Posted by William Weedon at 7:26 AM No comments:

at Built on the Rock: Christ, Culture, and Sacred Music at Lord of Life in Plano, Texas, and he mentioned the personal prayer of the communicant after receiving.
Christians pray different prayers at this point, of course. Many use the prayers in the front of the hymnal; others offer their own.
Here is a prayer that I prefer to pray after receiving the Savior's Body and Blood:
I thank You, O  Lord Jesus Christ, that You have granted me,  unworthy servant that I am, grace to receive this, Your most holy body and blood, and I pray that it would be to me for the forgiveness of all my sins, for strength in resisting temptations, for service in Your kingdom and finally for the glories of the life that never ends. Glory to You, Lord Jesus Christ, my King and my God!  Glory to You forever! Amen.
Posted by William Weedon at 1:43 PM 1 comment: