Some Pics from Advent Evening Prayer 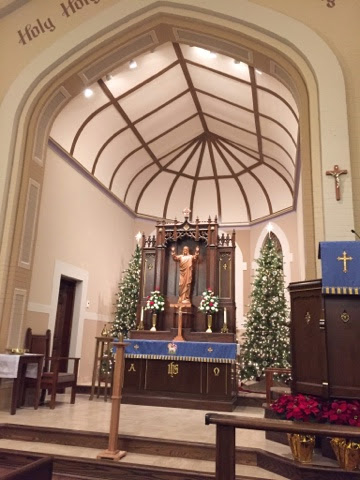 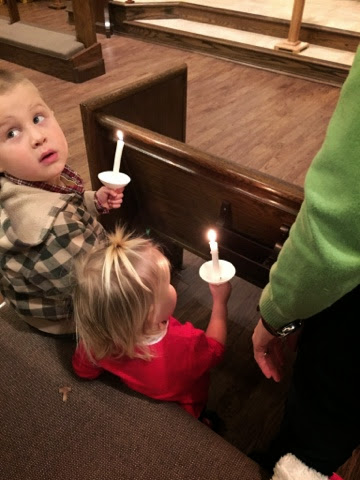 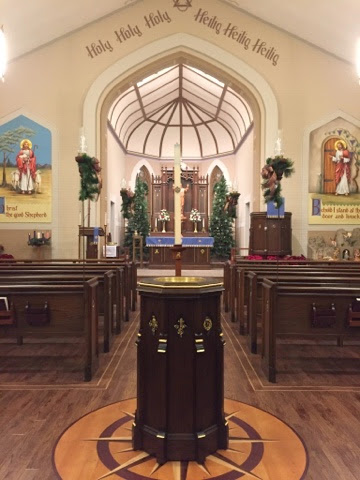 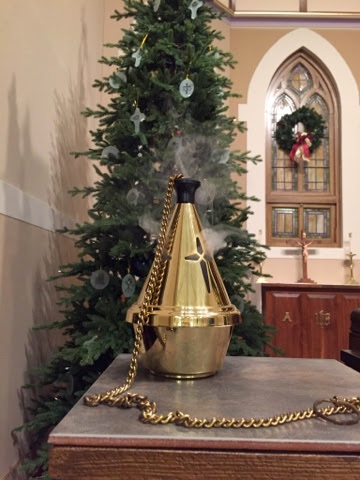 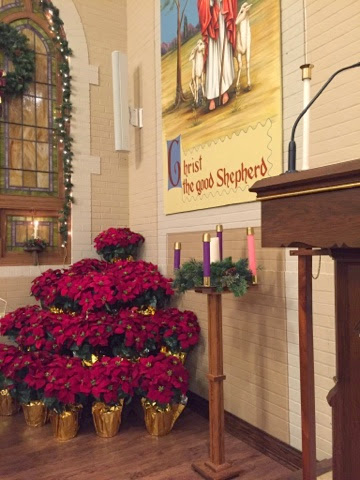 Thoughts from a Funeral

Jon Vieker served as organist and gave us some lovely pre-service music. The Church was packed. The bell rung and the Prelude proper began: Wachet Auf. Matt Janssen played his trumpet as impeccably as ever. The entrance hymn was "O Lord, How Shall I Meet You?" and I don't even know how many pastors processed in. Most vested, some not. Fritz Baue served as crucifer. Lee's coffin was covered in a beautiful pall.
Instead of the short, spoken Kyrie, the congregation sang "Kyrie, God Father." Cindi and I sang between first and second readings Haugen's setting of Psalm 23 (I know, I know, I'll give Lee my apologies when we are feasting together again). After the second reading we stood for the Alleluia and sang it from Divine Service three, Cindi and I doing the proper verse for the funeral between the triple alleluias. The Gospel reading was the story of Simeon from Luke 2.
Hymn of the Day was "Lord, Thee I Love." Jon and Matt did such an outstanding job with it. Jon began the third stanza and then the organ dropped out, til "AND THEN FROM DEATH AWAKEN ME!" and the singing in the room raised the rafters, with Matt's triumphant trumpet giving us a foretaste of the Lord's trumpet call.
After the homily, we prayed together those perfect prayers from Lutheran Service Book. Jon had me intone the antiphon before and after the Nunc Dimmittis using the same tone as that canticle has in Divine Service III, and the congregation sang it to that setting. After the closing prayer and benediction we sang "Go, My Children."
The coffin was loaded into the hearse, and then Pr. Fritz Baue led the procession across the street and up into the cemetery. I'm thinking it was maybe a quarter mile. We all walked. The vested clergy led the way following the cross and the great bell of St. John's tolled as we walked along. Pastor Pavelsky prayed the committal and then we headed back to the Church.
It was an honor beyond words to participate in his funeral, and he was a true friend. I told him once that there are only a handful of friends I have to whom I can tell absolutely anything, and he is one of them. Rest in peace, beloved of the Lord. I look forward to feasting with you again in the Day that knows no evening in the kingdom of our Father.
Posted by William Weedon at 3:58 PM 1 comment:

Random thought for the day...

...the LCMS structure as conceived by the founders of Synod only works if the members of congregations and the pastors of parishes are self-consciously LUTHERAN, that is, if they are willing to be corrected by and held accountable to the Symbolical Books in doctrine and in practice.
Posted by William Weedon at 4:51 PM 3 comments:

We were a little late for the hymn sing, but got to enjoy most of it. Then the Candlelight Service of Light, incense at Psalm 141, St. Paul school children chanted Psalm 50, we sang "Lo, He Comes" and then Pastor Ball read us the prophesy from Malachi 4 and preached a very comforting sermon on the same (referencing the four children so brutally murdered for Christ by ISIS). We joined in Magnificat, then during the offering, the school children sang the Advent Hymn Conditor Alme Siderum (stanzas 1 and 6 both in Latin and English). After the Ektenne litany and closing prayers, Carlo gave us Pachelbel's "Nun Komm." Such peace, such joy, and even the darkness of the news in the world around us cannot take away the hope of the healing that the Parousia will bring. The little martyrs raised and honored, disease and death past, and sins gone, having been covered under the saving blood of our Lamb. Truly glorious.
Posted by William Weedon at 9:01 PM No comments:

Posted by William Weedon at 7:02 PM No comments: 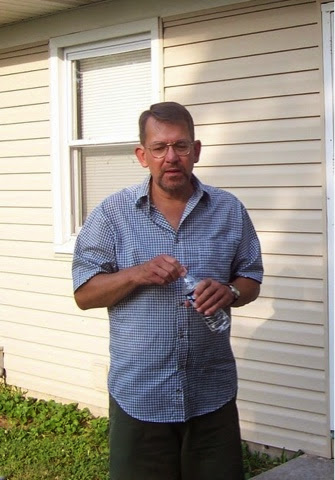 What a joy Evening Prayer was tonight! After the usual hymnsing before the service, the large candle was processed in and we lit our tapers from it and then joined in Joyous Light and gave thanks for the light that NO darkness can overcome. During Psalm 141 the sweet incense rose, as pastor censed the altar, the candle, and the people. The school children chanted Psalm 24 and did such an outstanding job. You could understand every word. We sang together St. Ambrose's "Savior of the Nations." Pastor Gleason read the prophesy from Jeremiah 23 and preached upon it: "Behold, the days are coming..." We stood to join in Mary's Magnificat and then during the offering the school children sang again: "Es Ist Ein Ros Entsprungen." First stanza auf Deutsch, and the rest in English. Then we chanted together the Ektenne with its broad sweep of intercessions, the collect for peace, the Our Father, Benedicamus and Benediction. We left to Bach's joyous Prelude and Fugue in g minor. From start to finish, it was an service brimming with Advent joy and there was nothing like hearing the school children singing so confidently, joyfully, and sweetly to swell the heart.
Posted by William Weedon at 8:30 PM 1 comment:

A Place of the Real Presence of Christ in the Midst of a Boisterous and Unholy World... 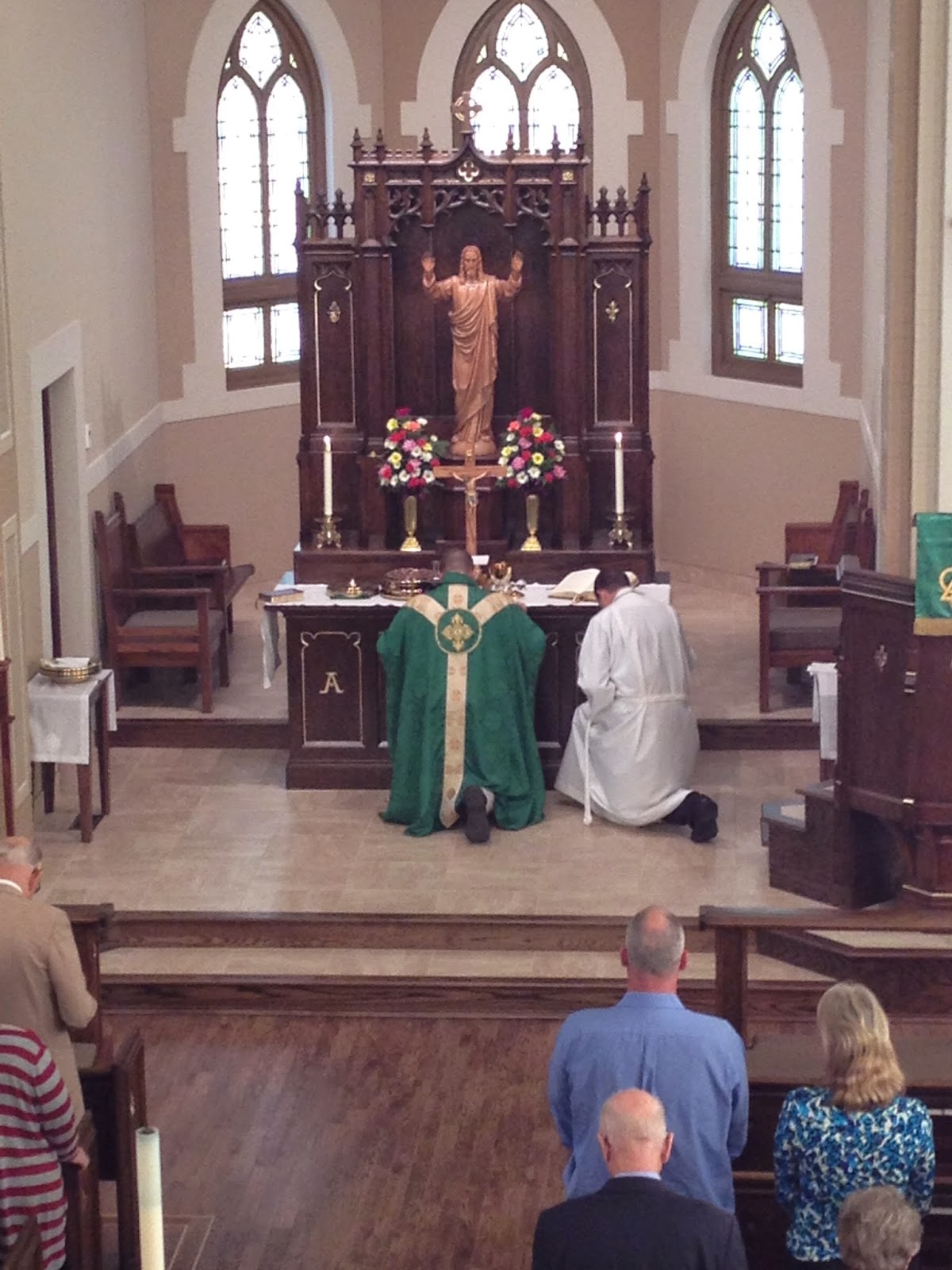 "We can desire nothing more beautiful and greater for our houses of God than that they be places where the Holy Supper is celebrated according to the institution of Christ, and a believing congregation is gathered about the altar to receive the true body and the true blood of our Lord. Only then will the church of the Gospel, the church of the pure doctrine remain among us. Only then will it remain, but it will truly remain, 'and the gates of hell shall not overpower her' [Matt 16:18]. And everywhere a congregation is gathered about her altar in deep faith in the one who is her Lord and her Head because he is her Redeemer, where she sings the Kyrie and the Gloria and lifts her heart to heaven and with all angels and archangels and the entire company of heaven sings, 'Holy, holy, holy' to the Triune God--there will her church be a true house of God, a place of the real presence of Christ in the midst of a boisterous and unholy world. And this text will apply to her: 'The LORD is in his temple! Let all the world be silent before him!' [Hab 2:20]."

Posted by William Weedon at 9:25 AM No comments:

Yesterday we commemorated St. Andrew, the Apostle. The Treasury of Daily Prayer has a beautiful devotion on the day from a homily of Valerius Herberger. Just a snippet: "Then when he saw the cross, he [Andrew] spoke: 'Hail, precious cross, you who were dedicated by the body of Christ; may He receive me through you, who redeemed me through you.'" The collect for St. Andrew's asks: "grant us also to follow the same Lord Jesus in heart and life" whom St. Andrew followed when he obeyed the Lord's call so long ago. The Sunday nearest St. Andrew's day always determines the start of Advent and alas since it fell ON the first Sunday of Advent this year, we commemorated him in the prayers without celebrating the Divine Service appointed for his day.
Posted by William Weedon at 7:42 AM No comments: