A Meditation upon the Commemoration of Holy Martyrs Perpetua and Felicitas 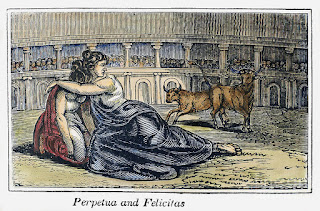 Jesus said: If anyone comes to me and does not hate his own father and mother and wife and children and brothers and sisters, yes, and even his own life, he cannot be my disciple. Luke 14:26

This is one of the hard sayings of Jesus. C. S. Lewis observed that He who is love incarnate by commanding us to hate is not actually telling us to harbor resentment and loathing toward those we refer to as our loved ones; rather, he is telling us that our loyalty and obedience to Him comes before any loyalty and obedience to them. And that when we make this choice, they do experience it as hate.

So with the two martyrs from the early 200s that are commemorated on March 7th. Perpetua’s wealthy father was no dummy. He knew the massive danger that attended his daughter joining herself to Christ in Baptism, or as he’d likely have thought, joining this mad sect. He loved his daughter very much and even when she was arrested and placed into jail, he visited her and begged her not to do this. Not to allow Christ to come between them and to deprive his granddaughter of a mother. Why did she hate him so? How could she treat him like this? Why did she love this Jesus more than she loved him?

But of course, Perpetua did not despise her father and no doubt took no pleasure whatsoever in causing him pain. But she could not choose please him above pleasing the One who had laid down His life for her and for us all on Calvary’s tree.

I’m sure the same scenario played out with Felicitas, her servant, who also was a mother and left her children in the care of relatives, to face with her beloved mistress the martyr’s death. They were according to ancient records scourged first by gladiators, then savaged by wild beasts. Finally they were finished off with the sword. Bleeding, dying, they shared the kiss of peace. The peace that they had come to know in Jesus and his victory over the grave, His blood that in love blotted out their every sin, and made them so much more than mistress and servant, made them sisters in Christ and of Christ.

Their unswerving devotion to Christ above the claims of family and blood, the joy of their companionship together in Christ, and their scorn of death and pain has lived on in the memory of the Church for century upon century. Their example and witness has served to bless and strengthen so very many others who followed them in persecution, suffering and death. Think of these two the next time you’re at a Confirmation and hear the question raised: “Do you intend to continue steadfast in this confession and faith and suffer all, even death, rather than fall away from it?” Wouldn’t that question have read better as “rather than fall away from Him?”

We actually have a hymn in our hymnal that sings about them. It’s LSB 661: The Son of God Goes Forth to War. “A noble army, men and boys, *The Matron and the Maid*, around the Savior’s throne rejoice In robes of light arrayed. They climbed the steep ascent of heav’n through peril, toil, and pain. O God to us may grace be given to follow in their train.”

And for such grace we pray in the collect for this commemoration: O God and Ruler over all our foes of body and soul, You strengthened Your servants Perpetua and Felicitas, giving them a confident and clear confession in the face of roaring beasts. Grant that we who remember their faithful martyrdom may share in their blessed assurance of victory over all earthly and spiritual enemies and hold fast to the promise of everlasting life, secured for us through Jesus Christ, our Lord.

Posted by William Weedon at 8:59 PM