A Reading from Ecclesiastes, chapter 4

9Two are better than one, because they have a good reward for their toil. 10For if they fall, one will lift up his fellow. But woe to him who is alone when he falls and has not another to lift him up! 11Again, if two lie together, they keep warm, but how can one keep warm alone? 12And though a man might prevail against one who is alone, two will withstand him—a threefold cord is not quickly broken.

In the name of the Father and of the + Son and of the Holy Spirit. Amen.

Okay, you two. Confession time. For me, not you. I always got in trouble for telling my congregation that I much preferred preaching funerals to weddings. They'd get so agitated: “Pastor, that's just wrong!”

But think about this for a minute from a pastor's perspective, will you? At a funeral the problem is obvious. There's a box with a body in it, but the person who used to inhabit that body has gone awol and everyone feels it. It hurts. Hurts like hell. And people are ready and aching to hear a word that can address the pain. And I had that word.

Now, take the wedding. The problem itself is hidden beneath all the joy and celebration of the day. And the folks out there, and sometimes the folks right here, are all thinking: Come on, preacher man, make it short and sweet. We want to get to the main event of the day: the party! Truth? Truth.

But you ready to get your minds blown? God thinks we've got it all backwards, as usual. He wants us to celebrate every funeral as a wedding feast and every wedding feast? They actually celebrate two funerals. Say what?

Oh, yeah. God tells you that for your marriage to be what He wants it to be there's something right here in front of me that needs to die. Let's call it your ego. He does this in the weirdest way: by tying two lives together. You ever seen one or been in one of those three-legged races? They're a hoot. You get to use both your legs, but one of your legs is tied to another person's and you have to use em both together. And try running like that! At first, you stumble a lot. But the longer you keep at it, the more you begin to figure out how two people can actually run as one and then the fun really begins

There's Jesus' idea of how marriage can be a funeral. Because the impulse inside you Curtis and inside you, Jess, to run off and do your own thing is what gets to die. The impulse to always have it your way. I want to do what I want to do when I want to do it and you get in my way, I'll make you sorry. THAT's the sucker that has to be killed in both of you. You're tied together from now on. For better and for worse. For richer and for poorer. In sickness and in health. Now, it is entirely possibly for you to just not get used to this being tied together. What happens then is one of two things: one of the other of you pulls out a knife and slices through that rope and says: “There. We're done with that. Let's just go each do our thing.” That's sad. Race over. Or, and this is just as sad, two people stay tied together, never learning how to run together, and just grump and grouse at each other and about each other all the way to the end of the race. Yikes. In that case, what Jesus wanted to die, never gets to die at all.

But the picture I've given you so far isn't the whole deal. You see, marriage is not like Jesus reaching down and tying a rope around both of your ankles so that you “get hitched.” It's way more fun than that! Jesus reaches down and ties your ankle, Curtis, to HIS and then He reaches over and ties Jessica's to HIS. Do marriage his way and it's not a three legged race, it's a three PERSON race. I used to totally miss this: You heard Jesus say it earlier: “What God has joined together, let not man separate.” GOD is what joins together. He's between the two of you. He's the glue!

Jess, I'm gonna pick on you because you're my own flesh and blood. Curtis, let me ask you: You ever try winning an argument with this woman? Of course you have. You've tried. But you've found out it doesn't work. Wanna know why? Because even though you're gonna change her last name today, she's still a WEEDON and Weedons all have this weird genetic defect that they always believe they're right. If you don't believe me, just ask anyone married to a Weedon in the room and they'll set you straight. We're a messed up bunch. But here's where it gets interesting!

She's ready to argue you down on anything, and you might be tempted sometimes to grab that knife and just cut the rope and get free, or to argue right back at her, whatever. You pull out the knife and Jesus looks at you: “Throw that thing away. You won't be needing it.” “But,” you begin. “No buts,” he says. “Time for a funeral. Because this isn't about what Curtis wants. Don't argue with her. Go tell her who she is in me. Tell her whom I am making her to be. Go say: Jess, I love you. You are an amazing woman. I am so glad that God brought us together. Come on, let's get moving!” And she'll be looking at you like you look at someone come back from the dead, because in a way, someone has!

Jessica, you're going to do the same for him. When you're tempted to say: “You know, Curtis, the problem with you is...” Jesus gives you that look. And the words and the thought die on your lips. “Tell him who he is in me,” says Jesus, “tell him who he is becoming as his life becomes love. Curtis, you're my rock. I love you so much. God has changed me so much through you. Thank you. Say that instead.”

And when either of you is saying in your head: I can't do that, Jesus is saing: “I think they’re getting this!” Of course you can't. Don't you see THAT'S why Jesus ties you together by tying you to HIM. Because where you don't have the strength of will, HE does. It's absolutely true that neither of you have the ability to forgive as much as the other has the ability to hurt. Welcome to the fallen human race! But HE'S the one who has already bleed to forgive the sins of every last one of us and that's the forgiveness He puts at your disposal to share with each other and to begin speaking into each other.

So you do your marriage this way, you've got this mega-strange relationship going on, where marriage is your ongoing funeral to the ego's drive to have it your way, and where you speak the truth to each other of who they are becoming in Jesus. You know what happens? Jessica's grandma always used to say: “Little pictures have big ears” by which she meant that the kids are always listening in. Shaela and Anthony and Brooklyn and if God grants you even more. And they see and hear this weird way you're learning to live together. Know what? They say to Jesus: “Dear Jesus, please give me someone like that too. Someone you tie me to with you in the middle, so that I can run that race. Cause I want my life to be like theirs.” And how sweet is that?

Marriage is an ongoing funeral, but such a marriage means, when the funeral comes that it has all the joy of the marriage. Just like Jesus is there to pick you both up when either stumble and the three of you are on the ground, so when you fall to the ground that last time in this life, you'll close your eyes and open them again and Jesus will be right there. He'll be saying: “Get up!” And this time you'll never go down again. Now you can run together in true freedom. “I always told you that I had more forgiveness than you had sin and more life than you have death and now you see it. Come on into the great marriage feast that never ends! It's the ultimate homecoming and my whole goal in putting you guys together was so that you could all show up here.” And then, God willing, the two of you will run to the feast together arm in arm with your kids, laughing for joy all the way. You see, the path is funeral to wedding feast, and it's exactly the reverse of the way we tend to think.

One last thing: if it sounds like child's play, that's because it is. Jesus said if we ever hope to enter his kingdom we have to become like kids! And what do kids do? They play! People don't stop playing because they got old; they got old because they stopped playing. Jesus is inviting you into this great game, this three-personed race, where you get to die to ego, to self every single day, and where the ending of the whole shebang is wedding and more joy than you can imagine. Your married life can BE an adventure. Something a lot more fun than any serious grumps (grownups) can imagine. So you guys ready? On your mark, get set, go! In the name of the Father and of the Son and of the Holy Spirit. Amen. 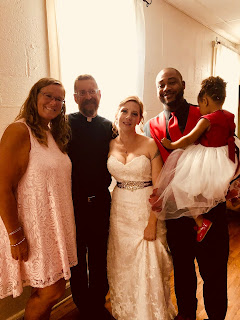 Posted by William Weedon at 9:24 AM