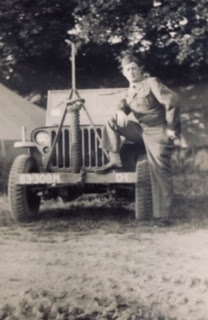 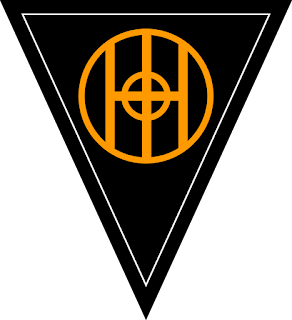 ...it started with my brother Butch asking me whether or not Daddy had been at D-day. So I began thinking: he and mom were married up in Wisconsin where he was training, February 12, 1944. And then there's the date of my brother's conception: he would have been conceived in early October 1944, which would still have Daddy state side. But surely not for long.

I found an old pic of him standing by his jeep or whatever you call the thing (found out later, it is a Willy). For all of a second I thought: I wonder if I could grab meta data... Oh, wait. Silly. A real picture. No meta data.

But then I looked more closely at it and wondered. The numbers on the vehicle are plain to read. 83-308M D-1. A little investigation via the wonders of the world wild web and voila! Daddy served in the 83 Infantry Division. That Division did land on D-day, but he was still here then. He must have joined them in November or so. He was always watching movies about the Battle of the Bulge. He loved it. And apparently, he lived it. After the battle was won, the 83rd did some recuperation in Belgian and Holland. And my mom had two momentos he brought her back from the war: a wall tapestry of some cats dressed up as people standing at a fence (with product of Belgium on the back) and some little Dutch brass figurines. I know that he worked with the medic division as a driver, hence the 308M. And I'm sure being buddies with the docs came in handy for him when his appendix nearly burst during his time of service.

If you look closely at the pic you can also see that there's a triangular insignia on his shoulder. I'm guessing it is the symbol of his division.

His unit did make its way through Central Europe and that is no doubt where he visited the famous Salzburg amphitheatre that impressed him so much. It was all 74 and 75 years ago, but somehow since it was my daddy it just doesn't seem that long ago.
Posted by William Weedon at 7:05 PM