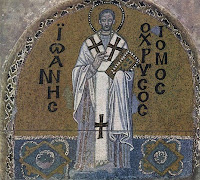 He's got to be my all time favorite among the holy fathers. From our Synod's website and the Treasury:

Given the added name of Chrysostom, which means "golden-mouthed" in Greek, Saint John was a dominant force in the fourth-century Christian church. Born in Antioch around the year 347, John was instructed in the Christian faith by his pious mother, Anthusa. After serving in a number of Christian offices, including acolyte and lector, John was ordained a presbyter and given preaching responsibilities. His simple but direct messages found an audience well beyond his home town. In 398, John Chrysostom was made Patriarch of Constantinople. His determination to reform the church, court, and city there brought him into conflict with established authorities. Eventually, he was exiled from his adopted city. Although removed from his parishes and people, he continued writing and preaching until the time of his death in 407. It is reported that his final words were: "Glory be to God for all things. Amen."

A snippet of the writing assigned to today by St. John:

And what does "ransom" mean? God was about to punish them, but He did not do it. They were about to perish, but in their stead He gave His own Son and sent us as heralds to proclaim the cross. These things are sufficient to attract all and to demonstrate the love of Christ. [Treasury, p. 1157]

Collect: O God, You gave Your servant John Chrysostom grace to proclaim the Gospel with eloquence and power. As bishop of the great congregations of Antioch and Constantinople, he fearlessly bore reproach for the honor of Your name. Mercifully grant to all bishops and pastors such excellence in preaching and fidelity in ministering Your Word that Your people shall be partakers of the divine nature... [Treasury, p. 1158]
Posted by William Weedon at 9:15 AM