"Be  comforted, little dog, in the resurrection you too shall have a golden tail"—Martin Luther

Stuart brought her to us, though his daughter Lydia had picked her out. It was the year that Bekah entered seventh grade. No question she was the runt of the litter. Her ears were always ginormous. "Will she ever grow into those ears?" we all wondered. We gave her the name Lucy. As the years went on, I joked more than once that it was clearly short for Lucifer!

A beagle of dimunitive size, and for much of her life, strikingly black like a beagle pup. My dad had always favored beagles (being a good country boy) and so had I. She was our second. But raised with our two indoor cats, Pumpkin and Katie, she developed oddly feline habits. She liked to perch up high and mastered the art of doing so in some rather precarious positions. She could balance on the back of a narrow topped chair if it gave her a nice view out the window. She also tried repeatedly to imitate the cats in jumping off high places. She never landed so gracefully and finally this caused her some real trouble. More on that in a minute.

I remember writing at my laptop, with her buddy Pumpkin the cat curling his tail around my keyboard and Lucy as a puppy in a cat carrier on my desk beside me, happily snoozing away.

She was stubborn, but not stupid. We never had to teach her to play fetch. She did it from the start. She loved to chase after a ball and bring it back...just out of your reach before she headed off again. David worked with her to teach her all manner of tricks. She learned to beg, to lay, to sit, and impressively to dance (a nice twirl). Oh, she'd do anything for food. She was a hound, after all. If David was her trainer, she was Bekah's baby from the get go. Slept with her. Loved on her. Just wanted always to be with her.

I'll never forget the one Christmas we put her Christmas present down on the floor and had the video out and told her it was hers. She had a blast. She attacked it and pulled off the ribbons and ran around the room with the paper and finally enjoyed the gift inside. I don't even remember what it was. Just remember being shocked at how a dog opened a Christmas present with evident joy and celebration. Go figure.

Then there was “the evil thing” - the vacuum cleaner! It lived in the hall closet, but whenever it made its loud appearance, she’d attack it just to make sure we were safe. And we used to sometimes just say: “eeeeeeeeevil thing” and she take off baying down the hall, ready to pounce as soon as the door were opened!

Rabbits! The first time she saw a rabbit as I walked with her on a leash. That walk was over. I had to pick her up and carry her, because all she had on her mind was howling after that bunny. We could see her age in the way she stopped noticing them in our yard.

But if she loved to chase rabbits, her real obsession was...FOOD! We kept her on a pretty strict diet and she retained her beautiful shape well into old age. Her naughty antics? Food. The day David took a bite out of a pizza and set the whole pizza pie on the floor before running to the bathroom. That tiny hounddog ate every bit of that pizza but that slice he had. She lay in her crate basically motionless for days! Or the Christmas when the chocolate pie that sat on the edge of the buffet proved too great a temptation and she ate a nice chunk out of it from the chair next to the buffet before we jailed her in crate for the rest of the day. Or the day that David brought in a nice pecan pie and left it on the floor of the garage as he was getting some more stuff in and, well, she found it. David and floors. You might be noticing a pattern. Lucy sure did!

But nothing was safe. She'd hop up into a chair and jump onto the table in a flash. Just like a cat. And she knew it was wrong. She's hear you coming and plunge directly to the floor. More than one trip to the vet over the damage she did her back. Until the time she really screwed it up. We thought she'd paralyzed it for good. Lauren was tending her and let her out and then noticed that she couldn't use her back legs. It got worse as the day went on. On the trip to the vet that day with Bekah I thought for sure we were putting her down. I was crying along the way and trying to prep Bekah for the inevitable.

But if Lucy was stubborn, she was no match for Bekah! The doctor though she'd had a stroke or something to compromise her spinal cord. But when he stuck a needle between the nails of her back feet, she twitched. He thought, there was a slight possibility she might regain some use of her two back legs. That was all Bekah needed to hear. I was not allowed to put her down. So I came home with a dog that couldn't walk. We used a sling under backsides and her front feet cheerfully went wherever she wanted to go. This went on for days and we even contemplating purchasing a doggie scooter of sorts.

Lo and behold, as the days went on, she began to compensate in a very odd way. She hunched her back and her legs stiffly started to go roughly in the direction her brain was telling them. She was never the same again, but she was finally even able to run, sort of, and she seemed as bloody cheerful as ever.

Her potty habits were always iffy. I remember clear as a day the time she climbed on Bekah's back as Bekah stretched out on the living room floor and just let loose. Number 1 only, thank heavens. Marking her territory? Who knows!  I think it was the classic case that she was never potty trained; we were trained to toss her out the door at regular intervals and she usually obliged. But as she grew so very old, she became truly incontinent and we resorted to diapers. Yes, our dog wore diapers. And we washed and changed them. And I thought nearly every day how I was just ready for that dog to go await the resurrection!!!

I had tried to bribe pastor to say at Bekah's wedding: "Who gives this woman and her dog to be married to this man?" He even turned down a bottle of scotch. Sigh. Andy was amazing though. He welcomed the dog into their new home and for the last months of her life, Lucy lived with Andy and Bekah. Bekah's big dream was for her to die at home and not be put down. To die surrounded with love. When we dog-sat her over thanksgiving, we strongly suspected that the end was in sight. She had lost so much weight and she only ate now and again. And the week after Thanksgiving, 15 years after she had first come into our lives, she finally breathed her last.

Devastating for Bekah and Andy, and yet, the end (as it so often does) makes it so that you were glad her suffering was finally over. By the time she died, she was nearly blind, deaf, and finally had lost all the zing that made her fun and infuriating while we got share her life. She just wandered kind of lost the last couple weeks.

So be comforted, little dog. I can't wait to see you dance around your girl at the day of the resurrection when you'll show us that you now remember all those old tricks and can do even better ones! “Behold, I make all things new.” All things. Till then, little one! 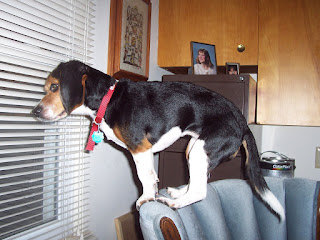 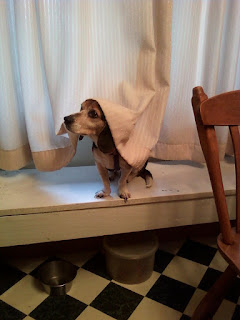 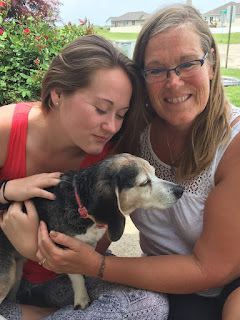 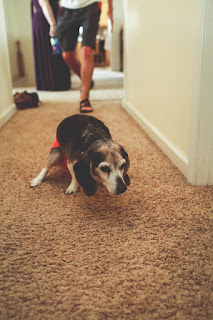 I am NOT in favour of this development.

Dogs are a wondrous gift of God, that any animal should be created as so close a companion to human beings.... If any will make it into Luther's vision of the new creation surely it will be the dog. I have always thought there is a bit of theological irony in the fact that we act god-like to dogs (owners, masters) and they are the most companionable and often obedient of creatures to us without much in return.... And yet when taken to the Vet to be injected with some dying syrup in a needled tube or held in dying hours what can be said to them except to stroke them (and some say we get more from that petting than does the pet)... what can be said but, "good dog, good dog...." a kind of juridical absolution for death's ending and the best a creature can do for a creature since the fall from first created goodness.

My deepest sympathy. It is a crushing blow to lose a four-legged member of the family. I remember Lucy.
Peace and Joy!
George

One of the disadvantages about reading personal blogs is the death of beloved family pets that we have come to know and love. I remember Lucy stories and missed it when she wasn't mentioned as often. My deepest sympathy to all and especially Bekah.