When you’ve hunted for years and years

...and the internet enables you to find the answer! Actually, the library would have too, but one has to GO there and know where to look.

I've long been fascinated by a quote that Chemnitz attributed to Chrysostom about the Sacred Scriptures:

This is called Homily 49. It actually comes from an interesting work. It was known as Opus Imperfectum, A Commentary on Matthew. You can read it in PG 56 (p. 748, 749) in Google Books. Chemnitz does reproduce the work pretty faithfully. In the middle ages, it was indeed attributed to Chrysostom, and Aquinas thought highly of the work. He once remarked that he'd rather have the rest of this commentary (it's Imperfectum because it has massive parts AWOL), than be the mayor of Paris (well, who would want to be the mayor of Paris these days? Kyrie eleison!!!). Pope Nicholas I (d. 867) thought it was from Chrysostom's hand. It was Erasmus who demonstrated that this was NOT written by Chrysostom. Oden notes that there's an odd interplay between the figurative and the literal in the work, and some slight Arianizing tendencies (sometimes these passages were expunged - I doubt Thomas ever saw them).

But finally, mystery solved. If CPH wants to footnote the passage accurately in Examen, it has a reference! 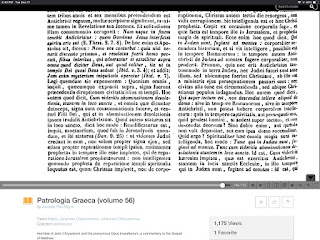 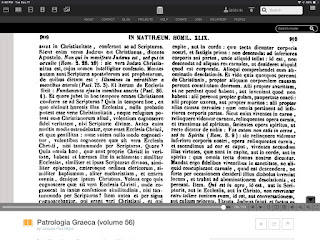 P.S. What clued me in was hunting in President Harrison’s splendid library in Chemnitz’ Harmony of the Gospels and finding this page: 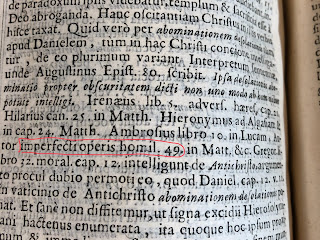 Posted by William Weedon at 5:21 PM

If your Latin isn't up to snuff enough to read the Latin, you can always read my translation of the work. It's two volumes in the Ancient Christian Texts series published by InterVarsity. The passage in question is on pp. 382-383 of the second volume.