I woke up thanksgiving morning and when I glanced at my phone my heart sank. I’d gotten a text from my boss and friend, Jeff Schwarz, that our mutual friend Pr. Paul McCain had suddenly passed away the night before.
I don’t even remember when or how Paul and I became friends, but it was a long time ago. For years we were both avid bloggers and frequently commented on each other’s blogs and interacted on different blogs as well. We didn’t always agree, by any stretch, but we had a strong mutual respect and, I think I may rightly say, an affection that grew deeper with the passing of the years.
Yes, sometimes in his on-line persona, Paul could be a bit...how to say this...overbearing? Yes, maybe that’s the word. He was fiercely loyal to his CPH and an uncompromising Lutheran, and didn’t tolerate well criticism of either. He was very proud of the great work that CPH has accomplished in his many years there, and indeed justly so. But his loyalty could lead to a sharp edge in some of his online interactions if he even suspected you were criticizing his beloved publishing house!
Over the years, I have any number of times suggested to folks put off by that sharp edge: “Look, THAT’S just not the actual Paul. Not really. Go to lunch with him and you’ll find a different man.” That soft southern accent that he never lost; his laughter and wit; his marked gentleness, his clear kindness, his joy in the grace of God, his ebullient delight in Lutheran theology and particularly in the Book of Concord. I don’t think he ever tired of talking about Lutheran theology! He and I even blogged together on the Book of Concord for a while, moving article by article through the Confessions. That’s the Paul I will remember and treasure.
One day I was doing some recording at CPH for a project, and Paul asked me if I’d seen the latest: Matt Carver’s lovely Lutheran Prayer Companion. He knew it was dear to my heart (I’d praised the original German on my blog a time or two) and when I told him that I had not, he literally grabbed his personal copy off his desk and without hesitation gave it to me. He said he’d pick up another. As I type this, it sits right beside me, where I use it most every morning and evening. I remember his delight in the way the Our Father prayers spread across the days of the week in this volume. Saturday on Deliver us from Evil, includes: “O my God, this last day of the week reminds me that my life has an end and I will have to leave it. Therefore, when the day and hour of my death shall come, grant that I may be done with all the sorrows of this life; fall peacefully asleep, trusting in the bloody merit of Jesus; and leaving this valley of tears enter into Your eternal joy and heavenly rest.” I will treasure this prayer book always as a remembrance my friend. 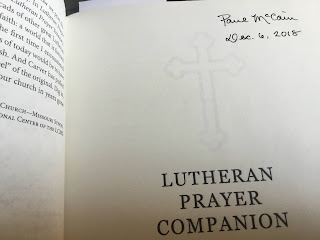 And that’s not the only one. I can’t even number or remember the various books he’d sent me across the years. Anything he thought might prove a blessing. I do remember that last year he sent me several of the latest volumes of Luther’s works (AE) with more of Luther’s sermons. His comment was: “I know you will read them, and put them to use to bless the church.”
It was only a month ago that his gentle side shone brightly to me quite personally. He became aware in a conversation that yours truly had deeply hurt someone who came to me for prayer for a sibling with cancer at the Synodical Convention and, distracted with preparations for the opening service, I’d been a bit brusk and dismissive. Paul told the person that wasn’t the Weedon he knew. And he took the risk of letting me know all about this in the most gentle and kind way. “Dear Brother in Christ, Will, a dear friend and cherished brother” and then he told me what had been said to him, “I just wanted you to know and I thought...I am going to fail my friend if I do not let him know. I would want one of my friends to let me know.” He thought (and rightly so!) that I’d want to repair the relationship. This led to an email exchange with the person, with me confessing having totally missed the gift that that person was to me from God in that moment: a beautiful reminder about what truly matters, people, their sorrows, and connecting them to Christ, and to stop focusing on the stuff that doesn’t (preparations for a big worship service). I confessed that I had blown it. I asked this person’s forgiveness and it was most graciously given. And I’d never have even known or remembered any of this, without Paul, the peace-maker.
I wrote Paul to let him know and thank him again for clueing me in. It was the last really personal exchange we had. He wrote: “Bless you, brother. I knew you would want me to make you aware of this lingering hurt to which you then could apply the salve of the liberating Gospel.... You know, Will, there are not many people I would reach out to this way to let them know, but I know your heart and I knew you would want to know.” I wrote back: “We know each other, my brother. We may not often see each other, but we know each other.” His response? What else??? “This is most certainly true.”
Rest eternal grant to Your servant, Paul, O Lord, and let light perpetual shine upon him! And bring the comfort that only Your victory over death and the grave can bring to his family and all who mourn his passing.
Glory to God for all things! 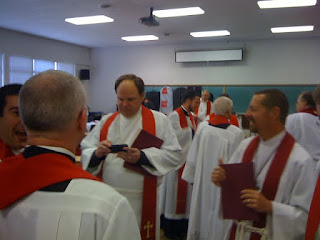 Thanks Will. A fair and beautiful tribute to a man I met as a freshman at then CCRF now CUC. He was a true friend who helped me through difficult days as a young pastor. He will be missed and meany memories cherished.

As I fondly remember Paul's commitment to Confessional Lutheran within our beloved Synod, these words of a Baptismal hymn came to mind: "God's Own Child I Gladly Say It..." https://www.youtube.com/watch?v=ULrYskFmuFg

I’d been on receiving end of Pr. McCain’s overbearingness on the blogs, particularly on Cyberbrethren, but he was much more pleasant later on via email conversations I’d had with him. The many “burgundy books” we received over the last fifteen years while he was Interim President and later Publisher were great.