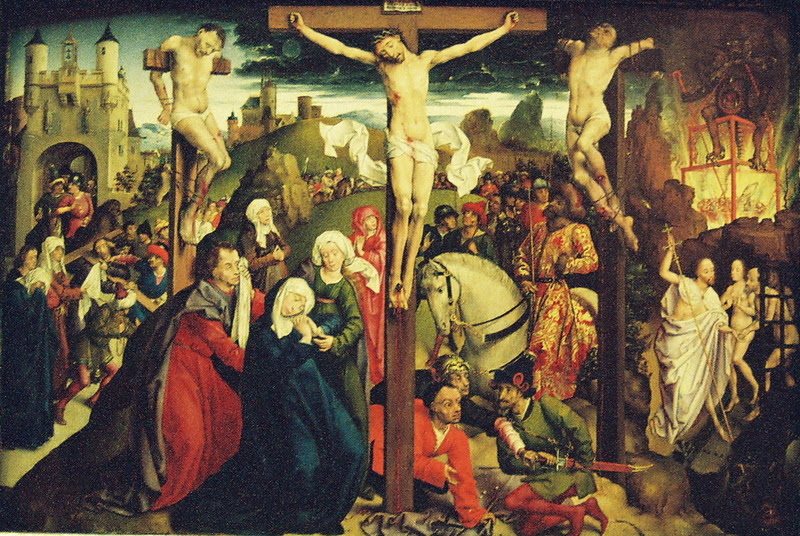 I hate fruit flies. And they’re all over the place this time of year. We finally figured out a way to deal with them, though. I filled a glass with some wine, covered it with plastic wrap, poked a few holes in it. The fruit flies make it through those holes to get the wine, but they can’t figure the way back out. A swirl or two every now and then they are trapped in the liquid that they were after. Drowned dead. I’ve got scads of them floating motionless now in the wine and leaving the glass of wine I’m drinking alone. It is a trap and it works marvelously. They keep falling for it.

Today we celebrate Holy Cross day. We might well call it Holy Trap day. For the Cross is a trap too. On it, the bait was raised: our Lord Jesus Christ. And Satan and Death took the bait and swallowed it down before they realized what they were doing. For, if they had, St. Paul points out they would never have crucified the Lord of Glory.

Our Lord is the bait and they come after Him just as they have swallowed down every other human being alive. They have Him, they think, locked up now in among the dead. But the One they have swallowed down was not just a human being. This human being was not only innocent of all sin, but He also happened to be God of God, Light of Light, very God of very God, begotten, not made, being of one substance with the Father, by whom all things were made.

“Death seized a body, and lo! It discovered God. It seized earth, and behold! It encountered heaven. It seized the visible, and was overcome by the invisible.” [St. John Chrysostom] The trap was sprung when Christ gave His body into Death, and Death greedily and willingly swallowed Him down. He turned out to be Death’s poison pill and by the third day Death was retching and tossing out all that he had ever swallowed along with Him.

Death came to us as the fruit of a tree, and now God in the flesh hangs upon a tree to be our life-giving fruit, that partaking of His flesh and blood – flesh and blood that went into death for us, in our place – we might be set free from death with Him forever.

The Cross as our message to God is: We don’t want you. We don’t need you. Go away and leave us alone. We’re perfectly fine on our own. Get out of our world. Get out of our lives. Stay away!

The Cross as God's message to us is: But I want you, though I don’t need you. I’ll never just go and leave you. You’re not perfectly fine on your own – your broken and damaged, hurt and dying. You need the healing I alone can bring you. You can’t make me hate you. I love you and I give my life to give YOU life. I pour out my blood to wash you clean of sin. I yield myself as the sacrifice in YOUR place so that you will never have to be alone again. For I will be with you every step of the way – through death now and into a life that never ends.

The Cross is how God destroys Satan, exposes his lies. Here is love that is stronger than all the hate of the world; Here is mercy mightier than all bitterness; Here is compassion that outshines the sun in warmth. God allows Himself to be killed so that YOU might be set free.

“If you take Me, you must let them go.” And as He is dying, Satan is whispering in his ear: “Now I’ve got you and if you think I’ll let them go – more fool you! I’ll destroy you and then I will go on destroying them.”

So hatred led the devil to fall into the trap that divine love had set. Thinking he was destroying Christ and with Him all of us, Satan’s dominion of death was wiped out from the inside. For suddenly within Death itself was Him who is Life Unending. Death quailed; Hades trembled; and Light Eternal shone upon the dead and led His faithful forth from that place into the Paradise He had prepared. “Christ risen from the dead has become the leader and reviver of them that had fallen asleep!”

“Now is the judgment of this world. Now the ruler of this world is cast out. And I, when I am lifted from the earth, will draw all people to myself.”

All people. Not just the Greeks who had come to see Him that day. But all people. You, me, everyone. For as we look upon the Holy Trap, the Cross of Christ, we see the incredible lengths to which God would go to have us as His own, to rescue us from the trap Satan had laid for us and which we foolishly fell into!

Here at His Table, He serves up the riches of His cross. Here we toast week by week the Holy Trap by which Satan and death were snared, by which our sins were wiped away and the hope of eternal life given to us. “My body for you, my blood for you, for the forgiveness of sins.” Again and again He reaches you the bait He offered in exchange for your life as the sign and seal that neither sin nor death not Satan can conquer you who shelter beneath the Holy Trap, beneath His cross.

I hate fruit flies and so I’m thankful for the trap that tricks them, and allows me to drink a glass of wine in peace without their interruptions. How much incomparably beyond compare better is the cup of wine that is His blood, the trap He sprang on our enemies, setting us free, so that we could lift up the cup of salvation and call on the name of the Lord? Amen.
Posted by William Weedon at 8:09 PM

As a mental image, just to think about what preaching was like during the enlightenment. . . take your first paragraph, and make that the content of the entire sermon - a practical sermon about how to handle the problems of the day. . . like fruit flies.

None of the other paragraphs would come. Just having a better glass of wine here and now. Come to think of it, it's not just enlightenment times - maybe there could be a book entitled, "Your best wine now."

I think Holy Cross Day just so highlights for me how absent the cross is in so many places.

nice image (and thanks for the tip about fruit flies. Though if I follow it, 14 month old Timothy will have less opportunities to giggle. He thinks its funny when daddy tries to catch those pests... he would think it was even funnier if he knew most of the time daddy ends up grasping at air... which sums up our attempts at getting rid of sin/death/devil - grasping at air)