Commemoration of St. Nicholas of Myra 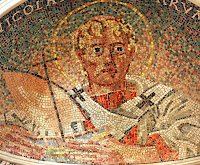 Today our Synod (together with the Church both East and West) celebrates the day of St. Nicholas.  From the Treasury and our Synod's website:

Of the many saints commemorated by the Christian Church, Nicholas (d. A.D. 342) is one of the best known. Very little is known historically of him, although there was a church of Saint Nicholas in Constantinople as early as the sixth century. Research has affirmed that there was a bishop by the name of Nicholas in the city of Myra in Lycia (part of Turkey today) in the fourth century. From that coastal location, legends about Nicholas have traveled throughout time and space. He is associated with charitable giving in many countries around the world and is portrayed as the rescuer of sailors, the protector of children, and the friend of people in distress or need. In commemoration of “Sinte Klaas” (Dutch for Saint Nicholas, in English “Santa Claus”), December 6 is a day for giving and receiving gifts in many parts of Europe.

Almighty God, You bestowed upon Your servant Nicholas of Myra the perpetual gift of charity.  Grant Your Church the grace to deal in generosity and love with children and with all who are poor and distressed and to plead the cause of those who have no helper, especially those tossed by tempests of doubt and grief.  We ask this for the sake of Him who gave His life for us, Your Son, our Savior, Jesus Christ... (Treasury, p. 989)

You can listen to Issues, Etc. interview on the topic of St. Nicholas here.
Posted by William Weedon at 5:41 PM