Patristic Quote of the Day 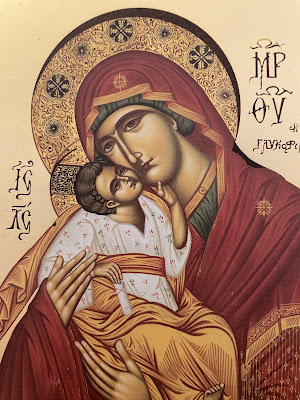 Nature here rested, while the Will of God labored. O ineffable grace! The Only Begotten, Who is before all ages, Who cannot be touched or be perceived, Who is simple, without body, has now put on my body, that is visible and liable to corruption. For what reason? That coming amongst us he may teach us, and teaching, lead us by the hand to the things that men cannot see. For since men believe that the eyes are more trustworthy than the ears, they doubt of that which they do not see, and so He has deigned to show Himself in bodily presence, that He may remove all doubt.

Christ, finding the holy body and soul of the Virgin, builds for Himself a living temple, and as He had willed, formed there a man from the Virgin; and, putting Him on, this day came forth; unashamed of the lowliness of our nature.

For it was to Him no lowering to put on what He Himself had made. Let that handiwork be forever glorified, which became the cloak of its own Creator. For as in the first creation of flesh, man could not be made before the clay had come into His hand, so neither could this corruptible body be glorified, until it had first become the garment of its Maker. —St. John Chrysostom, Christmas Homily