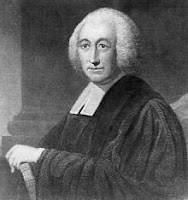 Today our Synod commemorates the father of American Lutheranism. From the Treasury and our Synod's website: Henry Melchior Muhlenberg.

Moving from the Old World to the New, Muhlenberg established the shape of Lutheran parishes for America during a 45-year ministry in Pennsylvania. Born at Einbeck, Germany, in 1711, he came to the American colonies in 1742. A tireless traveler, Muhlenberg helped to found many Lutheran congregations and was the guiding force behind the first American Lutheran synod, the Ministerium of Pennsylvania, founded in 1748. He valued the role of music in Lutheran worship (often serving as his own organist) and was also the guiding force in preparing the first American Lutheran liturgy (also in 1748). Muhlenberg is remembered as a church leader, a journalist, a liturgist, and—above all—a pastor to the congregation in his charge. He died in 1787, leaving behind a large extended family and a lasting heritage: American Lutheranism.

Today at the Pastoral Conference, we were treated to an excellent homily that commemorated his life and work by Pr. Jeff Hemmer. We were warned against wanting to have success like this blessed fellow had and urged to trust - as he did - in the one Good Shepherd, the Bonum Pastor, whose death alone is our victory. If he's reading, send me a copy and I'd love to post it.

You can read more on Muhlenberg here.

In the collect for today we pray: "...we give You thanks for Your servant Henry Melchior Muhlenberg, who was faithful in the care and nurture of the flock entrusted to his care. So that they may follow his example and the teaching of his holy life, give strength to pastors today who shepherd Your flock, so that by Your grace Your flock may grow into the fullness of life intended for them in paradise..." (Treasury, p. 791)
Posted by William Weedon at 10:04 PM

What an interesting fellow. Looks like he was very instrumental in shaping American Lutheranism. But I have one question: Will there be a modern day Muhlenberg to go over to Germany to revive the German Lutheran Church?