Kenyan and Baltic Bishops Speak Up 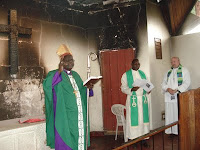 [HT to Dr. Tighe for providing me with these]

EVANGELICAL LUTHERAN CHURCH IN KENYA ON THE CHURCH APOSTATE

This is the statement of the executive committee of the Evangelical Lutheran Church in Kenya that met on the 12th November 2009, on the Apostasy of the church of Sweden to consecrate not just a woman to the office of bishop but a lesbian bishop on the 8th November 2009 in Uppsala cathedral.

We, in the Evangelical Lutheran Church in Kenya, are watching with shock, dismay and disappointment, the news about these recent developments on what we would call “ the mega” Church bodies in the world are up to, when they work so hard and tirelessly to lead the world into religiousless society (leave alone Christianity)

In addition to our statement on what took place in the USA when ELCA in its Church wide Assembly held on 21 August 2009, in Minneapolis, Minnesota, resolved officially to open the door of the office of the public ministry to those who are in “committed” same gender sexual relations, we further state that it beats our logics and saddens us very much that the church of Sweden, which at the reformation was the pillar of Biblical Reformation within Christendom has now decided to go apostate by consecretating a lesbian woman as bishop on the 8th November 2009 and indeed women in the office of the Ministry over and above its earlier decision to allow same sex partners to hold the Sacred office of Word and Sacrament.

We therefore again reiterate as we did in our statement condemning the decision of ELCA issued on the 25th of September 2009;

1. that we condemn in the strongest terms possible this unfortunate and anti-scriptural development in a church body that bears the name of the great reformer, Dr. Martin Luther;
2. that these Church Bodies have rejected the faith of Christendom as have been confessed all along starting with the Apostles and the fathers as is also confessed today in the three ecumenical creeds.
3. that these church bodies have out rightly rejected the Authority of the Scriptures as the Word of God
4. to the Lutherans, Dr. Martin Luther brought the Church from being under the authority of man and speculations of human philosophies to be under the authority of the Scriptures.
5. that we want to remind those Lutheran Churches and others who ordain women into office of the Word and Sacrament that these unfortunate practice is a novelty that just started some fifty year ago and indeed an epicenter of spiritual lesbianism in the Church today.
6. that we condemn sexual perversion in all its manifestations;
7. that same sex marital union is not only contrary to God’s will as clearly expressed in the Holy Scripture, but also repugnant to the natural created social order;
8. that God’s plan and purpose of marriage is fulfilled only in heterosexual (one man - one woman) life long commitment;
9. that this act by the Church of Sweden constitutes a loveless and callous disregard of the spiritual condition of those caught in homosexual bondage; and
10. that, most seriously of all, it is nothing less than a denial of the transformative power of the love we know in our Savior Jesus Christ, Who seeks all sinners in order to restore them to communion with the Father through the ministrations of His Holy Spirit in Word and sacrament.

Therefore, we must confess the Word of God and be faithful to it. In the name of our crucified and risen Lord Jesus Christ, we call upon the Church of Sweden to repent of its apostasy from the truth. We feel compassion for those among us who are caught in homosexual bondage and want them to know the transforming power of God’s forgiveness and love. Thus we hereby dedicate ourselves anew into the service of Him Who came to serve us sinners, including those caught in homosexual bondage, and Who by the power of His cross and resurrection creates in us a new will to please Him in patterns of living that are chaste and pure. In saying these things, we are standing with our fellow redeemed in the great consensus of the one holy catholic and apostolic Church, particularly with those church bodies in the International Lutheran Council. We want to assure the remnant Church bodies in the world, that as much the apostasy may continue aggressively, we believe the Church will not be defaced from the face of the earth. We therefore want to encourage and stand with the remnant Church bodies in Europe like Mission province in Sweden, Lutheran Church Missouri Synod in America, Faithful Lutheran Churches in Africa and the rest of the World to stand up and take the Challenge to remain faithful to the Scriptures - for by the Scripture the Lord will save the Church in the World even unto end of the earth. 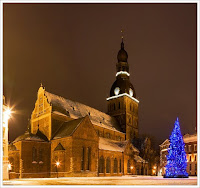 Especially at times of the economic difficulties when so many people have lost their external foothold and inner peace, we invite our compatriots to expand their appreciation of their Christian roots and to utilize all the spiritual wealth that is revealed in the Holy Scripture and offered to everyone who turns to God and puts their trust on Christ. The present crisis in the world economy is a fruit of a long term failure to act accordingly the principles which God has laid in the foundations of His creation. Consumerism and individualism of the modern society have taken their toll. To look for solution only by means of mending economy would mean to repeat the same mistake.

A spiritual renewal must come first, a renewed sense of balance between rights and obligations, communion empathy, solidarity, and mutual support. We believe that the most convincing inner motivation for that change is found in an encounter of a person with the living Christ. To facilitate that encounter by word and deed is the first and foremost calling of the Christian church. Jesus Christ said: “Go and make disciples of all the nations, baptizing them in the name of the Father and of the Son and of the Holy Spirit, teaching them to observe all things that I have commanded you.” (Matt.28:19-20)

The Christian community as a part of the society is not separated from issues related to the natural and human environment both locally and globally. Justice in the society and life quality of the people or protection of our Baltic Sea against the state negligence and corporate exploitation are some of the critical examples of this area of concern. As communities gathered around the Word of God and the keepers of Christian ethos our churches must address the spiritual root-causes of the contemporary problems. The churches must remember that the main instrument entrusted to them by God is His word – the law and the gospel - and the service to the neighbour in charity.

We also invite our political powers to realize more clearly the spiritual dimension of the human life and the good fruits of a positive co-operation between state, municipalities, schools and the church. Teaching and implementing Christian principles strenghthen the family as well as the whole community. Liberty of conscience and freedom of speech belong to the values of society defining religious life not only as a private but also as a public social right which has to be fostered. Religious education and religious studies form an inseparable part of this right.

At the present time a common witness of churches is vitally important, therefore we express our deepest concern about modern tendencies that weaken the fellowship among Christians and cause divisions in and among churches. The recent decisions made by some member churches of the Lutheran World Federation to approve of religious matrimony for couples of the same gender and to equate such conjugal life with marriage or to ordain non celibate homosexual persons for pastoral or episcopal office epitomize these tendencies that are tearing apart fellowhip among Christians. We affirm that the marriage is the conjugal life between a man and a woman and that a homosexual activity is incompatible with the discipleship of Christ. We believe that in following the modern trends, churches are departing from the apostolic doctrine of human sexuality and marriage. We see the Lutheran communion and eccumenical efforts endangered by such decisions and actions because they lead to a situation where the Lutheran churches, members of the Lutheran World Federation are not able to fully recognize each others ecclesiastical offices, to exchange the ministries and to participate together in preaching the Word and celebrating the sacraments.

We call upon our Lutheran sisters and brothers to unity and co-operation based upon the foundation of Holy Scripture and loyalty to the Lutheran confessions. Contemporary challenges demand a firm stand based upon timeless truths and values. The common understanding of the Gospel by churches is a treasure we cannot afford to lose and it needs to be passed on to the current and future generations. Our mission is to be faithful in that which we have received, God’s mercy. We are to serve our Lord and our neighbours thus until we all reach unity in the faith and in the knowledge of the Son of God (Eph. 4:13) 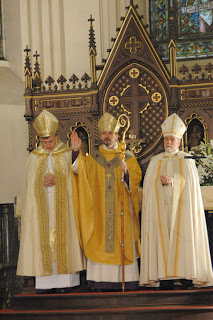 Too bad the Balts didn't condemn WO along with SS, like the Kenyans, but the Estonians (alone among them) practice the former vice (although eschewing the latter), and have done so ever since 1967.

I have been told that a fair number of Anglicans in Kenya (including Bishop Obare himself) have become Lutherans over the past 30 years, ever since the Kenyan Anglicans allowed WO (originally on a "individual diocesan option" basis) in 1978 or 79, and that the Lutheran church there is firmly opposed.

Agreed about the Balts!

William,
Permission to re-post at bioethike.com?

So much for Walther's goofy, of-the-cuff ecclesiology and doctrine of the ministry.

Yes, and they're all in fellowship with the LCMS, so they must not think Walther's doctrine of the ministry QUITE so goofy.

Walther had to deal with a people who were unhappy at being robbed by a self proclaimed bishop, (Not that the pastors under him didn't ratify the proclamation,including Walther!)
Bishops, in title or in substance were not going to be "in style" for a long time.
But, what have we got now, in fact, when the head of Missouri is answerable to no one but a convention he controls completely?
The "Council of Presidents" might as well be Cardinals.
Helen

O.K. "goofy" was off-the-cuff. My bad. I just can't help but question our doctrine of the ministry. I think it was an unfortunate consequence of pragmatism.

Sometimes I wish they were cardinals.

All things aside. Three Cheers for our Kenyan brothers! The global south may save the faith. Roman Catholic, Anglican, and Lutheran.

Of course - it's not mine to grant permission though. I take it that it was intended for dissemination.