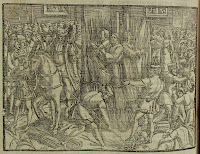 Today our Synod commemorates the holy martyr, Robert Barnes. From Synod's website and the Treasury:

Remembered as a devoted disciple of Martin Luther, Robert Barnes is considered to be among the first Lutheran martyrs. Born in 1495, Barnes became the prior of the Augustinian monastery at Cambridge, England. Converted to Lutheran teaching, he shared his insights with many English scholars through writings and personal contacts. During a time of exile to Germany he became a friend of Luther and later wrote a Latin summary of the main doctrines of the Augsburg Confession titled "Sententiae." Upon his return to England, Barnes shared his Lutheran doctrines and views in person with King Henry VIII and initially had a positive reception. In 1529 Barnes was named royal chaplain. The changing political and ecclesiastical climate in his native country, however, claimed him as a victim; he was burned at the stake in Smithfield in 1540. His final confession of faith was published by Luther, who called his friend Barnes "our good, pious table companion and guest of our home, this holy martyr, Saint Robertus."

The Treasury has a particularly beautiful writing of Luther on the joy of this martyr's death for the Gospel.

What God ordains is always good:
Though I the cup am drinking
That savors now of bitterness,
I take it without shrinking.
For after grief
God gives relief,
My heart with comfort filling
And all my sorrow stilling.

What God ordains is always good:
This truth remains unshaken.
Though sorrow, need, or death be mine,
I shall not be forsaken.
I fear no harm,
For with His arm
He shall embrace and shield me;
So to my God I yield me. LSB 760:5,6
Posted by William Weedon at 11:01 AM

Having had Anglican parents,who gave me insight into the English reformation ,there is alot to be thankful for regarding the 'top down" nature of it,and we can be thankful that Henry VIII started it. even though t his reasons were mainly political and personal.ironically it was Henry who was in Tyndale's last words at the stake "God open the eyes of the King of England",and HE did. The death of Robert Barnes was another of Henry's grand mistakes but we are thankful for the witness of Barnes and for his legacy.

Indeed, Matthias! I was so encouraged to see you contemplating joining the heirs of Barnes. Let me know how it goes!

Here is the verse for "For all Your Saints in Warfare", thanks to Bethany Tanis. I guess it must be from a British hymnal. Little late now, but keep it in mind for next year?

Praise, too, for England's doctor
Of brighter faith than fame.
Whose witness to the Gospel
Glowed brightest in the flame!
Lord, grant that our confession -
Like Robert's - may inspire
In other hearts the kindling
Of Your most holy fire.

I certainly shall let you know pastor WW.

Actually, the verse was written by Pastor Walter Synder. I pray it every commenoration of St. Robert Barnes now, Anglophile that I am.
Bethany