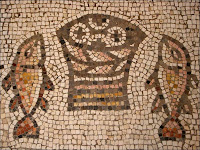 Doesn’t get much more basic than breathing and eating. That’s what we meet in the first reading - the Creator God who forms man from the dust of the ground and then breathes into his nostrils the breath of life so that man becomes a living creature. But living creatures are hungry - they have to eat to live - and so God plants a garden and spreads the earth before man as his banqueting table. Only one tree of the garden is forbidden, and of that one God notes: “The day you eat it, you shall surely die.” For as Paul says in our second reading: “The wages of sin is death.”

Satan, of course, would go on to insist: “You will not surely die.” I like to ask the confirmands who was telling the truth: God or Satan? They immediately say “God.” I tell them to read it again.

Who was telling the truth? Truth is that the day man ate of it, he didn’t die - not if you mean stop taking air in through his nose, stop breathing. He didn’t keel over. The man and the woman went right on breathing for a long time after that. But since the confirmands were right after all, and God doesn’t lie, we see that death is something more than not breathing. That you can walk around inhaling and exhaling and yet be dead. The walking dead - zombies as Pastor Peperkorn referred to natural man at Higher Things this past week. And the walking dead have only postponed their meeting with the not-breathing sort of death. It’s coming - that day when we draw in our final breath and there is no exhale. And to meet that day as a zombie - as one of the walking dead, is to discover another dimension of death more horrible than any met so far.

To stave the not breathing off, though, we know we have to eat. And so eat we do. Shoving in food as a way to push back that day. We can even come to think that food is what is keeping us alive; it may be what keeps you breathing, but it’s not what keeps you alive.

St. Paul reminds the Romans in today’s epistle that what keeps them alive is the free gift of God in Jesus Christ our Lord. That’s the gift signed, sealed, and delivered on the day of Baptism - an utter grace - to us zombies by nature, dead in the sense of being separated from God and His life. With the splash of the water, his enemies are made friends, the dead are brought to life, sins are wiped out, the gift of the Holy Spirit dumped on us, and a new birth begins a new life stirring within us. A person begins to live in the real meaning of the word - to live in fellowship with Christ the life that never ends. To share in the communion of the blessed Trinity. And that sets us free. Instead of being the slave to our own appetites and desires, and the dead end that THAT is, we get to die to all those and become slaves of God and so receive all the blessings that come from belonging to Him.

But the life given in Baptism is a life that needs to be fed and nourished; and it’s not nourished with ordinary food. It’s nourished by the Words of God. The baptized are put into a life of hearing those Words, and receiving from them constantly the nourishment needed to go on living forever in the new life Baptism began in them and that God promises to bring to completion in them.

So there’s the crowd in today’s Gospel reading. Three days - three whole days - they’ve been hanging with Jesus. Why? To listen to Him as He taught the Old Testament Scriptures and opened their eyes to see God like they’d never seen or guessed He could be - a loving heavenly Father who sends His Son to them to blot out their sins and to give them a life that no death can ever take away from them. They hang on His words! But three days is three days. Their snacks long since eaten up. They’re hungry now and weak. And the One who has been their teacher isn’t oblivious to their need. He says to His disciples: “I have compassion on the crowd, because they have been with me now three days and have nothing to eat. And if I send them away to their homes, they will faint on the way. And some of them have come from far away.”

Is that wonderful or what? He who has been supplying them with bread of the first order - bread of life, words on which to live eternally - He is also concerned for bread of the second order - the bread of this world, food to put in your body to keep it going as long as God would have your earthly pilgrimage continue. It wasn’t too long before this that the disciples had seen him take five loaves and two fish and feed a massive crowd. When He says: “I have compassion” did they think right away of the last time?

No. Of course not. They’re like you. And me. Always forgetful that the Lord IS compassionate and abounding in steadfast love. They forget that, in the words of today’s Gradual, “those who look to Him are radiant and their faces are never put to shame.” Instead of looking to Him, they think he’s laying the problem on them to sort out. They freak. Absolute panic: “How can one feed all these people with bread here in this desolate place?” Just like you and I freak when we let the size of the problem divert our eyes from His face.

He doesn’t scold, but I do wonder if He sighed. In any case, He does it again. Same miracle. Bread taken, thanks offered, loaves given into the hands of the disciples with some small fish to feed the crowd. And, just like before, what Jesus takes in His hands to bless is enough and more than enough. Seven baskets full of left overs gathered up after everyone had eaten and was satisfied. To this crowd who had sought first the kingdom of God, how true it was that everything else they needed was added unto them.

Now those who first heard Mark’s account would have been nodding their heads. They’d get it, because Jesus still is up to the same verbs. He still teaches and then takes bread and gives thanks, breaks it and puts it into the hands of His ministers to give away. Bread that is so much more than mere bread - not bread to keep the breathing going for a little longer before death inevitably comes. Rather the bread that is His Body. His Body that once tasted death, stopped breathing, as He died to pay the wages of your sin: “the wages of sin is death.” To pay those wages for every last one of you. And it’s the same Body that the Father raised on the third day and released from death - never to die again to be the “free gift of God, eternal life in Christ Jesus our Lord.” Now He comes to you in that Body to give you anew all that He won for you - His forgiveness way bigger than all your sin, His indestructible life way stronger than any death you’ll ever face, and His promise of a place with Him forever.

St. Isaac the Syrian once said that at the Lord’s table, we breathe already the air of the resurrection in which the righteous will exult. Come, then, and feast with Christ - here’s food that by His Words and promise will keep alive in you the life He freely gave you at Your Baptism. Here’s food that will keep you breathing the sweet air of the resurrection and make the moment when your body stops breathing no big deal; no big deal at all - not to any who trust His Words and promises, not to any who are in Christ. And for that be all glory to the Father, the Son, and the Holy Spirit, now and ever and to the ages of ages! Amen.
Posted by William Weedon at 5:41 PM

Amazing that even when Satan tells the truth, he lies.