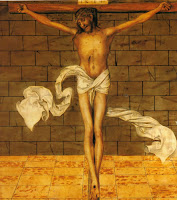 Sometimes it takes a while to sink in. I've been praying the Tuesday prayer in Treasury for months. It asks, among other things:

Teach us through their example and the example of so many holy martyrs to be ever watchful of the confession of Your Son's name.

Confession. We're used to speaking of "evangelism" but sadly the word itself is rather tainted with the hucksterism of the American religious marketplace. But to be watchful for the confession of Christ's name... Now, that's a bit of a different ball game. We pray that through the example of those now suffering and those who have suffered in the past, that we'd be strengthened to look for and seize every opportunity presented us to confess Christ, and to do so regardless of what suffering may come our way.

I'd suggest we'd be better off if we thought of our task vis-a-vis the world in such terms, rather than "evangelism." Evangelism has about it the scent of "result" whereas confession is utterly innocent of that odor. What those who HEAR Christ confessed will do with that confession is completely out of our hands and it always will be. Our task is to simply confess Him. And it's a HIM we're confessing, then, not a strategy of "soul winning" we're working on! That's what He demands of us, after all:

The Holy Spirit loves to use the confession of Christ's name to bring people to faith! I still remember those young catholic boys who confessed Christ to me (a young teenager at the time myself) - basically reciting the Apostles Creed to me and telling me that this was what I needed to believe to be saved. It set me on the path to Christ! And as Lutherans, we're resourced not only with the ecumenical Creeds, but with the wonderful explanations to the Creed that are part of our own catechism.

What does it mean to confess Christ? Try this on for size:

"I believe that Jesus Christ, true God, begotten of the Father from eternity, and also true man, born of the Virgin Mary, is my Lord, who has redeemed me, a lost and condemned person, purchased and won me from all sins, from death and from the power of the devil not with gold or silver, but with His holy precious blood and with His innocent suffering and death, that I may be His own and live under Him in His kingdom and serve Him in everlasting righteousness, innocence and blessedness, just as He is risen from the dead, lives and reigns to all eternity. This is most certainly true!"

What better confession of Christ could we place onto the lips of God's people? I think Higher Things should make a T-shirt with THAT on it! Can't you see a bunch of Lutheran young people running around with such a confession not only on their lips, but on their backs for everyone to read?

P.S. I bring the T-shirt up because I wore my Sola T-shirt to work out in today and one of the employees at the Y struck up a conversation with me about where I go to Church. He's drifted from going to Church at all; I invited him to come out to St. Paul's!
Posted by William Weedon at 6:33 PM

I like this blog post--it's part of the reason why we call ourselves "confessional" Lutherans and not "evangelical" Lutherans. Contrary to what courtroom dramas would have you believe, confessing is what Christians do. Confessing is simply giving an answer.

That's sort of one thing that I was having trouble over with a non-Christian friend of mine who's very close to me. I was telling her something about what confessional Lutherans believe, and she was really finding a lot of it distasteful or hard to believe. Finally, in the end I figured out I was simply giving a confession of my faith. I wasn't trying to dress it up and make it marketable to the masses. I was giving an answer for my faith. The conversion part was beyond my own power.

In my experience it's been crucial to keep in mind that while it is very true that folks may take offense to what is said (much like Ariel described)-- there is after all the offense of the Cross -- we need to be tempered by St.Peter's exhortation to give reasons for our faith with gentleness and respect.


We should be mindful that the offense of the Cross -- plainly and clearly expressed -- is no license for being offensive.

I especially appreciated the comment on evangelism harboring the scent of "result." I have seen that in my own parish. Many think that if our church isn't growing as fast numerically as others, then our efforts are failing. So sad. I guess that's the "result" of living in such a blessed, market-driven, and business-oriented society.

So, thank you for including that in your thoughts. Your words are very encouraging, as usual!

Can this "event" add to the Ablaze! counter if the initial impetus came from Higher Things - a non-recognized service organization?