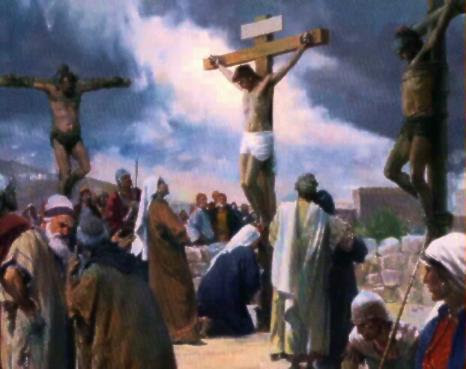 Pilate fixed three crosses on Golgotha: two for the thieves, and one for the Giver of life. When Hell saw it, he said to those below, “My ministers and powers, who has fixed a nail in my heart? A wooden lance has suddenly pierced me and I am being torn apart! My insides are in pain, my belly in agony, my senses make my spirit tremble, and I am compelled to disgorge Adam and Adam’s race. All men were given to me by the Garden’s tree–but now a tree is bringing them back again to Paradise.”

When he heard this, Satan, the cunning serpent ran crawling and said, “What is it, hell? Why do you groan for no reason? Why produce these wailings? This Tree, at which you tremble, I carpentered up there for Mary’s Child. I suggested it to his enemies for our advantage, for it is a Cross, to which I have nailed Christ, wishing by a tree to do away with the second Adam, just as I did away with the first one. So do not be afraid. It is dry and barren. It will not harm you. Keep hold of those you have. Of those we rule, not one will escape again to Paradise.”

Hell replied to Satan, “You have lost your senses–you, the cunning snake of old! All your wisdom has been swallowed up by the cross, and you have been caught in your own snare. Lift up your eyes and see that you have fallen into the pit you dug! Behold that Tree, which you call dry and barren, bears fruit: a thief tasted it and has become heir to the good things of Eden. Moses’ rod led the people out of Egypt, but this tree brings mankind back again to Paradise.”

Satan answered, “Wretched hell–cease this cowardly talk! Your words reveal your thoughts. Are you afraid of a cross and of the Crucified? Not one of your words has shaken me, for these deeds are part of my plan. I will also open a grave and entomb Christ, so that you may enjoy your cowardice doubly–from his tomb as well as from his cross. When I see you, I will mock you. For when Christ is buried I will come to you and say, “Who now brings Adam back again to Paradise?”

Then hell spoke back, “Now is the moment for you to listen, Satan. Now you will see the power of the Cross and the great authority of the Crucified. For you, the cross is folly. But the world sees it as a throne, on which, as though seated, Jesus is nailed and hears the thief cry to him, ‘Lord, remember me in your kingdom.’  Listen now as he answers, kingly, ‘Today, poor beggar, you will reign with me. For with me, you will go in again to Paradise.”

At these words, Satan began to wilt, and what he heard he saw: a thief witnessing to Christ crucified. And so, amazed, he struck his breast and said, “Christ did not answer his accusers, and yet he speaks to a thief? To Pilate he never spoke a word; but now he addresses a murderer, saying, “Come, live in pleasure”? What is this? Who has seen words or deeds done by this thief, by means of which he goes again to Paradise?

Again the devil called out, “Receive me, Hell. I turn to you; I submit to your views, I, who did not believe them. I saw the Tree at which you shuddered, made red with blood and water. And I shuddered, not, I tell you, at the blood, but at the water. For the blood shows Jesus’ slaughter, but the water shows his life, for life has gushed from his side. For it was not the first but the second Adam who carried Eve, the mother of all the living, again to Paradise.”

Now Hell and Satan cried out together, “Let us lament as we see the Tree which we planted transformed into a holy trunk, beneath which thieves, murderers, tax collectors and harlots will find shelter, and reap sweet fruit from what seemed barren. For they cling to the Cross as the Tree of Life. Pressed against it and swimming, through it they escape, and come again as to a harbor, again to Paradise.”

Hell said to Satan, “Swear, tyrant, finally to crucify no one.” And Satan replied, “You take an oath to kill no one. We have had our experience, let us draw back our hand. Let neither of us ever again tyrannize the race of Adam, for it has been sealed by the Cross, it has been given life, like a treasure of a precious pearl in a fragile pot; life, which a thief, well-suited to his trade, took on the Cross. For stealing he was nailed up to die ; and having thieved he was called again to Paradise.”

O most high and glorious, God of fathers and of youths, your willing outrage has become our honor. For in your Cross, we all may boast. To it we have nailed our hearts, that on it we may hang our instruments and sing to you, the Lord of all, from the songs of Zion. The ship from Tarshish once brought gold to Solomon; but to us your Tree gives back, every day and every moment, wealth beyond price. For it brings us all again to Paradise.
Posted by William Weedon at 7:38 AM

I am always moved while reading this sermon. Thank you for posting it.

And a good reminder of who it was crucified our Lord: satan.

nice to read that again.

The last paragraph before the prayer struck me, since many more, especially of our Lord's followers, were in fact crucified after Good Friday. So, is Romanos saying old habits die hard, even for the devil? The deceiver deceives himself into thinking he has learned his lesson? The father of lies lies to himself about never crucifying again? He can't help destroying everything he touches, even when he knows what he is destroying is himself.
And, tragically, I behave in all these self-deceiving, self-destructive ways. And thus, in undeserved love, the merciful Father provides this dark and gloriously Good Friday to save me from myself. Kyrie, eleison - for your mercy endures forever.

Yes, never forget he is a liar and the father of it!